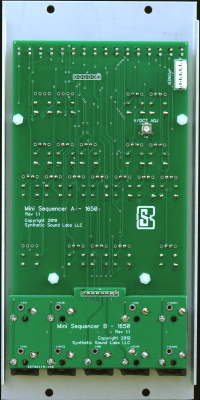 We have collaborated with our friends at Division-6 to bring you this handy 1650 Mini Sequencer in 2 MU.

The 1650 gives you standard CV and gate out, plus an ACC out (Accent? Accessory?)  Use the ACC output to open up a filter, enable a glide, trigger a drum, or whatever you can think of.

It has its own internal clock to get you up and running in a hurry, but you can connect an external clock if you need greater control of tempo or want to sync with other devices.

The module will store your latest sequence even when the power has been removed.

You can also cascade multiple 1650’s to create longer, more complex and syncopated patterns.  Why would you need more than one sequencer?

The two sequencers will run completely independently, or you can daisy-chain them using the START IN / END OUT jacks to create sequences of any length.

Push RUN to start playing a sequence. The RUN LED will light to tell you that you are in Run mode. Push it again to pause. The sequencer steps can be programmed while paused.

Push RESET to stop the sequence, go to step 1, and enter Ready mode. The STEP LED will blink to let you know that you are in Ready mode. This means that when you press RUN again, the sequencer will play step 1 on the next clock pulse instead of skipping it and going to step 2.

If you want to start on a different step, you can use the STEP LEFT and STEP RIGHT buttons to pick a different one.

While in Ready mode, you can use the note/keyboard buttons to manually play tunes without messing up the sequence you have stored in memory. Gate timing will follow your button presses.

Programming is done while the STEP LED is steady (not the blinky Ready mode) and the sequencer is not running. You can enter Program mode by pressing RESET a second time, or pausing a sequence with the RUN button. Use the STEP LEFT and STEP RIGHT buttons to pick which step you want to program, then press the note and octave you want that step to play. The new note is automatically stored in non-volatile memory.

Remember about the STEP LED:

In addition to standard notes, you can also program a REST, LOOP or ACC into a step:

To adjust the tempo, use the STEP buttons while a sequencer is running.

The START IN and END OUT jacks can be used to daisy-chain sequencers together:

The switch contact in the START IN jack is normalled to the END OUT signal, so with nothing plugged into either jack, each sequencer will loop by itself once it goes past the last step of a sequence. This is exactly the same as running a patch cord between END OUT and START IN on a single sequencer.

You can connect a cable to the END OUT jack without breaking the internal looping. This gives you an “end-of-sequence” gate signal that you can send to other modules, or use to start other sequencers.

Connecting a cable to the START IN jack breaks the internal looping, so when the sequencer gets to the end of the sequence it goes into Ready mode rather than continuing to run.

Of course, if you have more sequencers (or even other devices), you can daisy-chain as many as you want.

You can use the trim pot on the rear of the module to calibrate the sequencer to 1 volt per octave.

The outputs of the sequencer are buffered, so they should maintain their voltages even when loaded down by another module. You may find, however, that the standard calibration doesn’t work with certain modules. In this case, you can use the trim pot to adjust the calibration so that it is correct for your module.