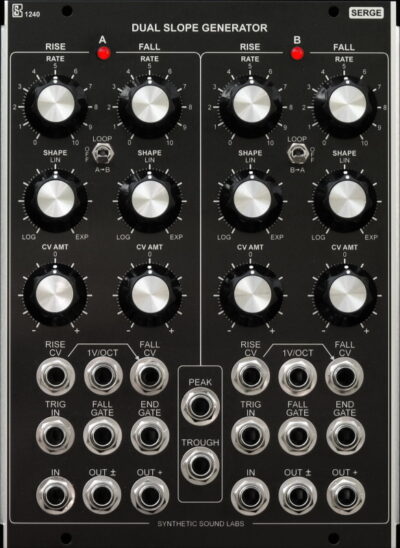 SSL is pleased to introduce the flexible 1240 Dual Slope Generator (DSG) – a long awaited addition to the MU world – designed in close collaboration with the legendary Serge Tcherepnin.

The 1240 DSG is the ultimate patch-programmable control voltage generator.  A Serge Slope Generator is a slew limited unity gain voltage follower whose positive and negative slew rates are voltage controllable.  It has an extremely wide range covering sub-sonic to high audio rates.  Trigger inputs and pulse / gate outputs extend the slewing functions for use as a voltage controlled (VC) LFO, envelope generator and a variable pulse delay mono-stable functions.

One VC responds roughly exponentially, and two additional VC inputs are routed to individual Rise and Fall slope attenuverters for maximum flexibility and convenience.  This newly updated circuit now includes temperature compensation to help eliminate drifting.  The linearity and accuracy of the slews allow them to be used for exacting applications such as portamento functions.

The 1240 has two identical slope generators (A & B) – each of which can be set to self-trigger (Loop), or even to trigger each other for some wild modulation and audio effects.  It also has two auxiliary outputs which provide an output that is the greater of A & B (PEAK), and another that is the lesser of A & B (TROUGH).  These are interesting and go far beyond normal summing / mixing.

Be sure to visit the DOCUMENTATION tab above.